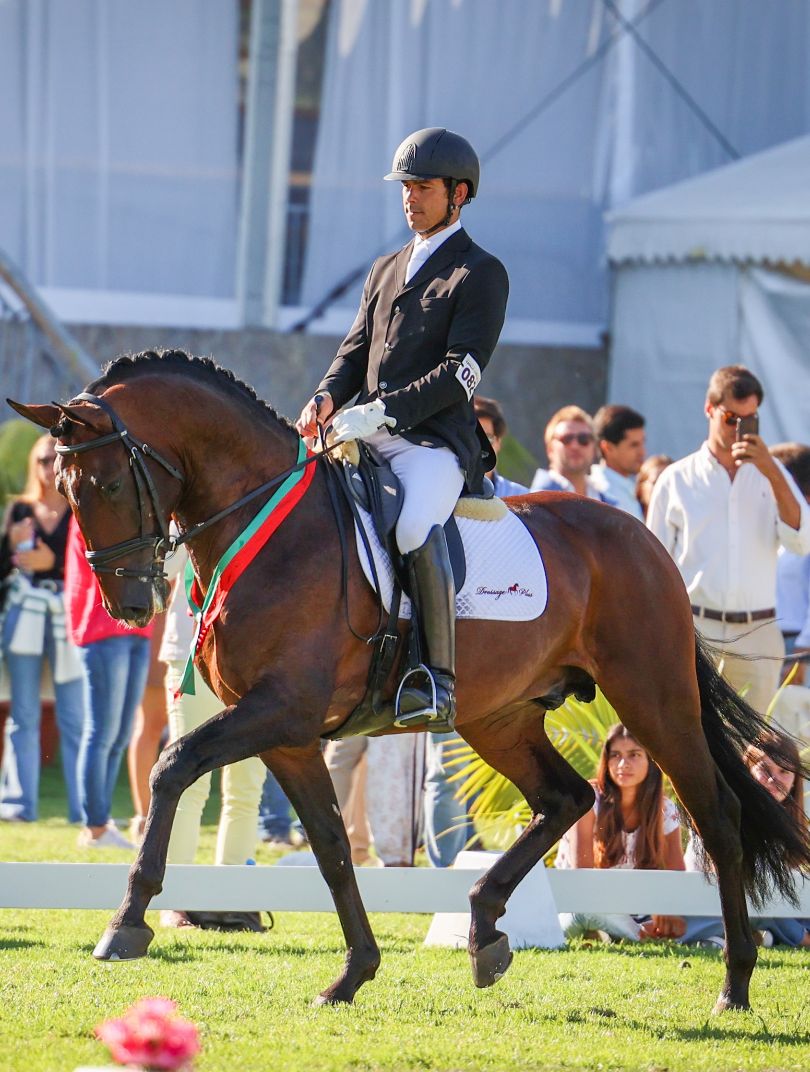 And the big winner was... the Lusitano horse.

From the 17th to the 19th of September, another edition of the International Festival of the Lusitano Horse took place. Once again held at Hipódromo Manuel Possolo in Cascais but in a different format, where the public could be closer to the action and where the layout of the event invited the interaction between the breeders and other visitors of the festival.

Starting by the end and being perhaps the highlight of the festival, on the last day of the event, the ridden horse classes were disputed. In the class of ridden horses with 5 years or more, horses of enormous quality were presented, being certainly one of the most disputed classes of the last years where all classified horses were awarded with a gold medal. Once the order of classification was defined, the horse Marfim do Penedo from Resina Antunes Stud was awarded 4th place, in 3rd place was Miura do Cais for the breeder of Casa Agrícola Ireland Saraiva, in 2nd place was Morante from Sociedade das Silveiras Stud and finally first place was Lord Plus from Dressage Plus Stud.

Lord Plus was classified for another very disputed class where the decision was to decide who would be the winner of the best ridden horse award where the horse Neptuno das Faias from Luís Bastos Stud was already waiting, which had won its horse class of 4 years also with gold medal.

This decision was decided by the 7 judges present at the Festival and could not be more disputed, leaving the winner Lord Plus with 4 votes against 3 votes of Neptuno das Faias.

Neptuno das Faias, winner of the 4-year-old ridden horse class, competed in this class with high quality horses, ahead of the horse Novo Rico from Ferraz da Costa Stud, which qualified in 4th place with a silver medal, in 3rd place was Nilo das Arcas from Manuel Maia Correia Stud, with Nilo from the breeder Sociedade Agrícola Vila Formosa achieving the 2nd place, also with a gold medal.

In the other class this Sunday, the mounted mares were presented, where the winner was the mare Missanga da Coudelaria Félix da Costa with a silver medal. The mare Nuance D’Atela was also classified in 2nd place, Minerva de Tineo in 3rd and finally the mare Nata D’Atela in 4th place.

On Saturday were presented the 1, 2 and 3 year old males presented by hand.

In the 3-year-old foal class, the winner was the colt Orion with gold medal of the bredder João Cláudio Oliveira, in 2nd place was the colt Ofensor, also with gold medal from the Manuel Assunção Coimbra Stud, in 3rd place with silver medal. Opio from Dr. Pedro Ferraz da Costa breeding stud and the colt Orpheu from Silva Carneiro stud completed the classification in 4th place.

In the 1-year-old foal class, the foals Quimono from Leonardo Franco Stud were classified with a gold medal, Que Fino Plus by the Dressage Plus Stud also with a gold medal and Quiebro das Lezirias by the Coudelaria Companhia das Lezirias with a silver medal. 2nd, 3rd and 4th place respectively.

On Friday, the first day of this festival, the classes of female fillies presented by hand were disputed.

In the 1-year-old fillies, the winner was the filly Querida from the breeder Leonardo Franco stud with a gold medal. In 2nd place was Queen Plus from Dressage Plus Stud with gold medal, 3rd place went to Queen da Caniceira from Herdade da Caniceira Stud, also with gold medal, and finally in 4th place was classified Quimera filly by Manuel Assunção Coimbra Stud.

Regarding to the competition of 2 years old fillies, Perdiz da Misericordia from Batalha Reis stud farm was classified in 4th place, in 3rd place with a silver medal was Pêra from Rui Madaleno's breeding, the 2nd place was for Pintura Plus with gold medal and in 1st place also with gold medal was Pérola do Luar from  Coudelaria do Luar Stud.

In the 3-year-old fillies class the winner Oliva was the last of the day to qualify for the award for best female presented by hand. Also in this class of 3 year old fillies, the filly Olivença from Manuel Assunção Coimbra stud was 2nd place with a gold medal, the filly Ode D'Atela was 3rd with a silver medal and finally in 4th was the filly Odalisca from Ferraz da Costa Stud also with a silver medal.

On that day, the prize for the best female presented by hand was disputed from the winners of each class, and the winner was the 3 year old filly Oliva from the breeder Leonardo Franco Stud Farm.

At this festival, a gala was held on Saturday night, which included the presence of the show by Miguel Fonseca, the Portuguese School of Equestrian Art, the Equestrian Center of Leziria Grande and the working Equitation carousel. This Gala also honored theriders who were present at the Tokyo Olympic Games.

In this 32nd International Lusitano Horse Festival, there was also room for the delivery of diplomas of new recommended and merited stallions, as well as the delivery of trophies of the Lusitano horses that stood out in the different disciplines.

Included in the event's program was also the 5th journey of the national championship of working equitation where Gilberto Filipe stood out with victories both in the Masters category with the horse Zinque das Lezirias and in the consecrated level with the horse Luar da Caniceira.